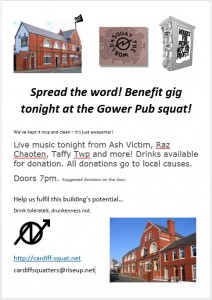 Squatters and supporters at the Gower Pub in Cathays today successfully resisted an eviction attempt. The squatters were told that they were about to commit a criminal offence by staying in the building as an Interim Position Order had been granted by the County Court. The squatters pointed out that the IPO was invalid as there were at least 4 mistakes. This was after the court case the day before in which mistakes in the paperwork were admitted by the judge and the solicitor was asked to take the stand to give evidence under oath to support their claim to the building.

After a 15 minute stand off, as 3 Orbis sitex company workers were waiting, and many conversations took place between police and the bailiffs, there was eventually an agreement that the court papers should be served again. They were then filled in there and then, with parts that the court should complete, completed by the solicitor instead, the legality of this is still to be determined. There was also still two technical errors carried over from the previous order.

Photos and video from the eviction attempt coming soon.

To celebrate there is a benefit gig at the Gower, 29 Gwennyth Street, CF24 4PH for local causes including migrant solidarity and anti-homeless campaigns.